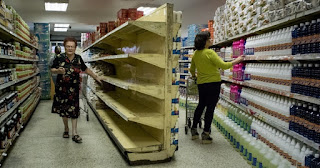 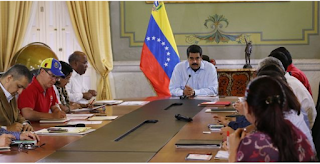 BOLIVARIAN VENEZUELA IN THE AXIS OF AGGRESSION

For years Venezuela has been in the axis of systematic aggression and distortion by the media. The situation escalated yet further when the right wing coalition party MUD seized power in the 2015 elections after having won a clear majority of National Assembly seats in the country. According to President Nicolas Maduro the current situation resembles the spring 2002 coup attempt a lot. The same forces are attempting yet another coup. Because of this President Nicolas Maduro declared a national emergency on 13 May 2016 in order to stabilise the situation in the country, and to prevent a foreign intervention that is threatening it from without, and a coup d'état from within.

The change of power from left to right in Argentina and Brazil undermines the Latin American integration, and it will negatively reflect the work of the UNASUR, an organisation of co-operation in South America. By consequence, Venezuela has lost many of its allies in its own continent. The right wing winds in the region also threaten Venezula's future.
THE THREAT FROM WITHOUT
The co-operation of the Venezuelan right wing opposition and the US government is an irrefutable fact. Via their embassy in Caracas, the US operates the right wing opposition of the country, and finances it with the direction of the organisation the National Endowment for Democracy (NED). NED is a political aid organisation founded in 1983, and it is financed and supported by the US congress. It claims to be ‘guided by the belief that freedom is a universal human aspiration that can be realized through the development of democratic institutions, procedures, and values’. NED claims to support NGOs that promote democracy in Africa, Asia, Central and Eastern Europe, Eurasia, Latin America and the Middle East with hundreds of donations yearly. The organisation names as its set of values human rights, independent media, civic education, and strengthening of democratic values and culture.

The US spy plane AWACS Boeing E-3 Sentry has already twice breached the Venezuelan air space in May 2016. The radar aircraft is an improved military version of Boeing 707-jet plane, that can be used in various intelligence missions, eg. photographing, nuclear observation and electronic espionage. The former president of Colombia, Alvaro Uribe, suggested in a conference held in Miami in the beginning of May that foreign soldiers should be sent to Venezuela to help the right wing opposition. Although Venezuela has been able to take care of all of its international duties and debts in time, the land hasn't been given loans to finance its own national investments.


THE THREAT FROM WITHIN
The US backed right wing opposition in Venezuela tries to agitate people to rise up and resist the national emergency state by organising a mass demonstration and riots. Anybody can still protest in the streets as long as the protests won't turn into violent riots. The government requires that the demonstrators respect the laws and officials of the country.


The right wing opposition in Venezuela has collected 1,85 million signatures to have a referendum demanding an ousting of the president. In the inspections 190 000 of the signatures collected have turned out to be posthumously written according to national registers. Even if the opposition managed to get the required two million signatures, it would still take 170 days to organise a referendum. In addition, any registered voter can file a complaint about breeches that may occur during this process, in which case the referendum could be postponed even further.
The government has several times invited the representatives of the right wing opposition to a dialogue over the problems in the country. The opposition has completely refused all negotiations. The national assembly that is currently in the hands of the right wing refuses to accept a national emergency.


CONTENTS OF THE EMERGENCY PROGRAM
The central contents of the emergency program declared by the Bolivarian Government are securing the sale and supply of groceries in Venezuela, curbing the effects of climate change by regulating public and private sector working hours, internal security measures in the country to maintain order and to ward off instability, prohibition to carry weapons temporarily in public places (bridling crime), providing support from the public to the private sector in marketing, and in the distribution chain of goods, and preventing hoarding, exorbitant prices, smuggling and economic crime. In addition, the national Bolivarian army guarantees the successful delivery of alimentation and basic supplies to the population. The Government regulates the sale of currency, unless its purposed use meets the needs of the population and revives the national economy. The Minister of Finance covers the costs resulting from these measures.

INTERNATIONAL MEDIA IS PUSHING FOR A CHANGE OF POWER

The Bolivarian Revolution is being consistently maligned in International Media. The International Press releases news about a desperation of President Maduro while prognosing that he will leave office before his term. He is accused of conspiracy and plotting a military coup. He is claimed to have bought guns to be used against civilians. In addition, they say that the country is at the brink of Civil War. In President Maduro’s own estimate the international distortion campaign in the media strives for a general acceptance of foreign intervention directed at Venezuela.

Helsingin Sanomat joined, as is its custom, the international pack of hyenas on 18.5.2015:” The low oil prices in the world would be a problem for Venezuela, even if the country were governed well. Now it is giving its finishing touches to a calamity which Maduro calls an economic war against Venezuela. We have seen them in South America, but this calamity is caused by the Venezuelan government itself.”


WE HAVE THE RIGHT TO SELF-GOVERNMENT


President Nicolas Maduro stated in an international Press Conference held on 17.5.2016 in Caracas:” We have the right to self-government. We have been enjoying it in Venezuela for 17 years. We are victims of imperialism. This is its worst attack in 10 years. Owners of various media are important agents in this policy. This is a conspiracy of international media against the Venezuelans so that all the deeds of the right-wing opposition would be justified. You will not get from here what you are after!

The military intervention on Venezuela has not succeeded so far. The imperialists want to take back the power they lost in 1999 to Hugo Chávez. We must rise up in resistance against the intervention for humanism, democracy and revolution. We will do everything in our hands to achieve internal peace in our country.

We ask for peace and cooperation in our continent. We have the right to grow and develop independently. We ask for solidarity from the world. We will not kneel, but we intend to act in a humanistic and democratic way in accordance with our Constitution in every circumstance and situation. We plan to make it through these difficult circumstances.”


WHY SHOULD WE DEFEND THE BOLIVARIAN VENEZUELA?

According to Article 2 of Venezuela’s Constitution from 1999: “Venezuela constitutes itself as a Democratic and Social State of Law and Justice, which holds as superior values of its legal order and actions those of life, liberty, justice, equality, solidarity, democracy, social responsibility and, in general, the preeminence of human rights, ethics and political pluralism.”


Since 1999 the Bolivarian Venezuela has obliged itself to fulfill national and international human rights obligations, including political, economic, social, cultural and civil rights. According to the UN Convention On Human Rights:” Everyone, as a member of society, has the right to social security and is entitled to realization, through national effort and international co-operation and in accordance with the organization and resources of each State, of the economic, social and cultural rights indispensable for his dignity and the free development of his personality.”


A society capable of providing all its members an equal, decent and just life, and clean environment, is a sustainable society. The right-wing opposition of Venezuela is not offering the Venezuelans such an option. Its alternative is to overturn the Constitution of the country and cruel neoliberal capitalism. It would mean in practice severe trimming of state income, cutting social security, an independent Central Bank, increase in interest rates, privatising state-owned companies, the state pulling out of production and import, ending price regulation and floating the exchange rate of the bolivar, recanting the control of the movement of capital and of the transparency of the Government. This policy would lead to the destruction of the social achievements of the Bolivarian Revolution and the Civil War likely to ensue it.